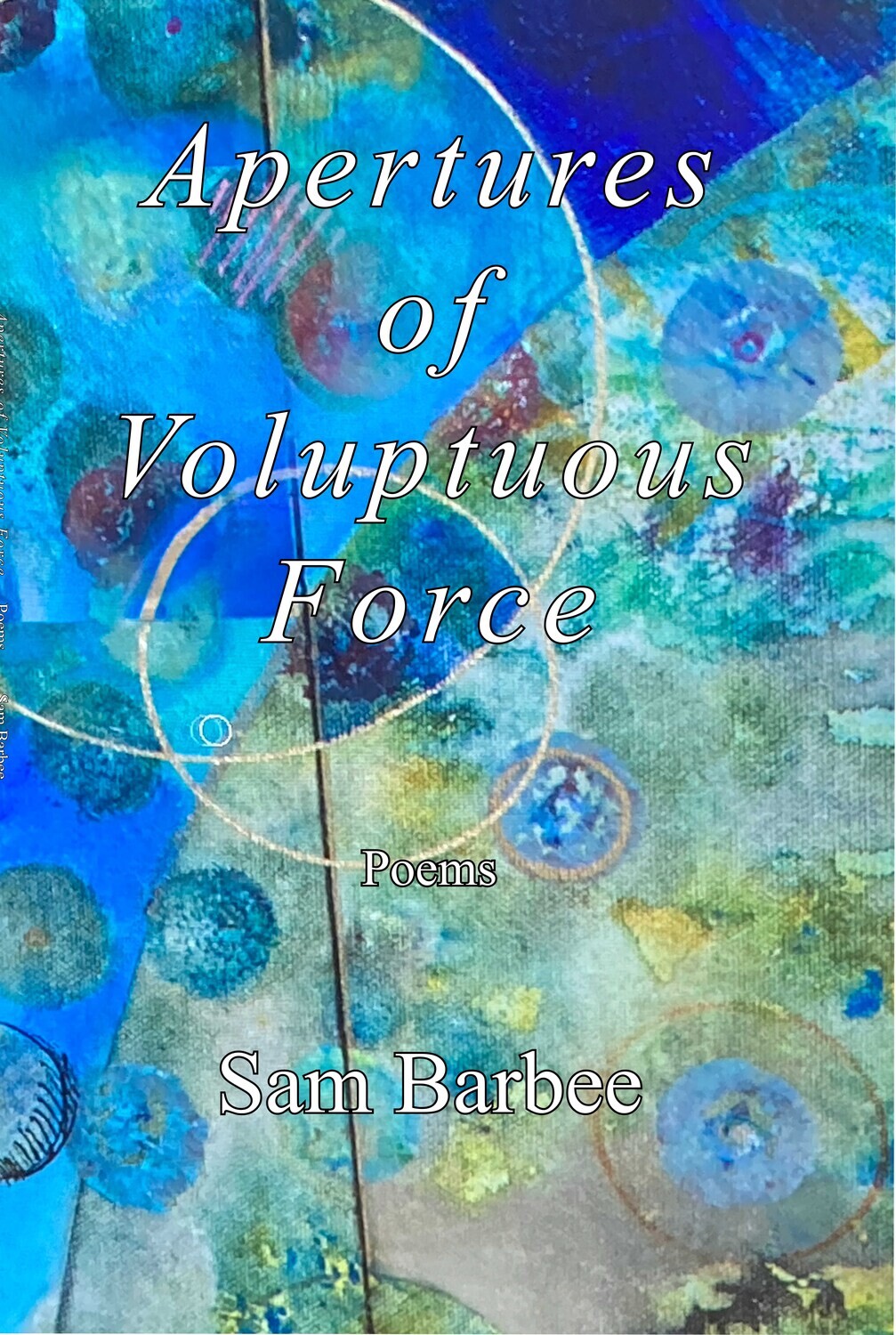 Sam Barbee opens a portal on a world in tumult, storms inside and out, and invites us to “pet my feral dread.” Observation of daily life calls forth a maximalist esthetic, a riot in language, images detonating against each other. In poetry of paradox and opposition, Barbee seeks the balm of nature, but finds it lurking only at the edges of devastation, like a lone crayfish at a pool’s edge after the hurricane. Timely in its use of colloquial language and touchstones such as masks and ADHD, these poems warn “we have all given consent” to horror of the modern-day, yet in broken landscapes we can sometimes find ourselves in “a pleat of bliss.”

—Valerie Neiman author of In the Lonely Backwater and Leopard Lady: A Life in Verse

Sam Barbee’s Apertures of Voluptuous Force is a stunning collection of lush, unforgettable, and well-crafted poems. I often found myself re-reading a line or a whole stanza again simply for the sheer pleasure of the words Barbee chose and arranged so beautifully. The sonic typology alone of the poems is impressive, and his range of topics, expansive. Witness Barbee’s skill in a few lines from the poem Lumens: “Infused in owl’s/screech, midnight, explicit with stars,/clad in joules, blinks as it releases/comets and Aurora Borealis.Tinkling,/the tickled world stares back.” Barbee is all of this and a sense of humor, such as in the poem “Body Neutral” in which the speaker states, “My body:/the podgy regent.” Who could resist this book? I’ll be coming back for more as these poems deserve a third or fourth reading.

—Malika King-Albrecht, author of The Stumble Fields and editor of Redheaded Stepchild

For years I have watched Sam Barbee’s progression as a poet as his lens widened, his sentences growing with vibrant imagery, each poem flashing open with a vital story only he can see. He writes like a director orchestrates a film; and I am always keen to see where he places his camera, what flushes up in his singular vision, what relationships he has discovered and sharpened by his engagement with the world. An aperture can be defined as the opening in a lens through which light passes to enter the camera. A poem’s power and motion are regulated by the amount of restraint allowed to pour the right words in the right order, lending light in its engagement with the reader. Barbee’s mastery as a poet is cinematic, his poems are indeed Apertures of Voluptuous Force, and as you make your way through their various musical frames you may also find they have opened new and unforgettable vistas in your imagination.

—Keith Flynn, author of The Skin of Meaning and editor of The Asheville Poetry Review

Sam Barbee has three collections of poetry.His two most recent are Uncommon Book of Prayer (2021, Main Street Rag), and That Rain We Needed (2016, Press 53), which was a nominee for the Roanoke-Chowan Award as one of North Carolina’s best poetry collections of 2016.

He is a two-time Pushcart nominee; was awarded an “Emerging Artist’s Grant” from the Winston-Salem Arts Council to publish his first collection Changes of Venue (1997, Mount Olive Press); has been a featured poet on the North Carolina Public Radio Station WFDD; received the 59th Poet Laureate Award from the North Carolina Poetry Society for his poem “The Blood Watch”.

He has served as President of the Winston-Salem Writers, and North Carolina Poetry Society, and is one of the originators of the Poetry In Plain Sight – now in its tenth year -- a poetry initiative to feature NC poets on broadside posters and display them in NC towns statewide.