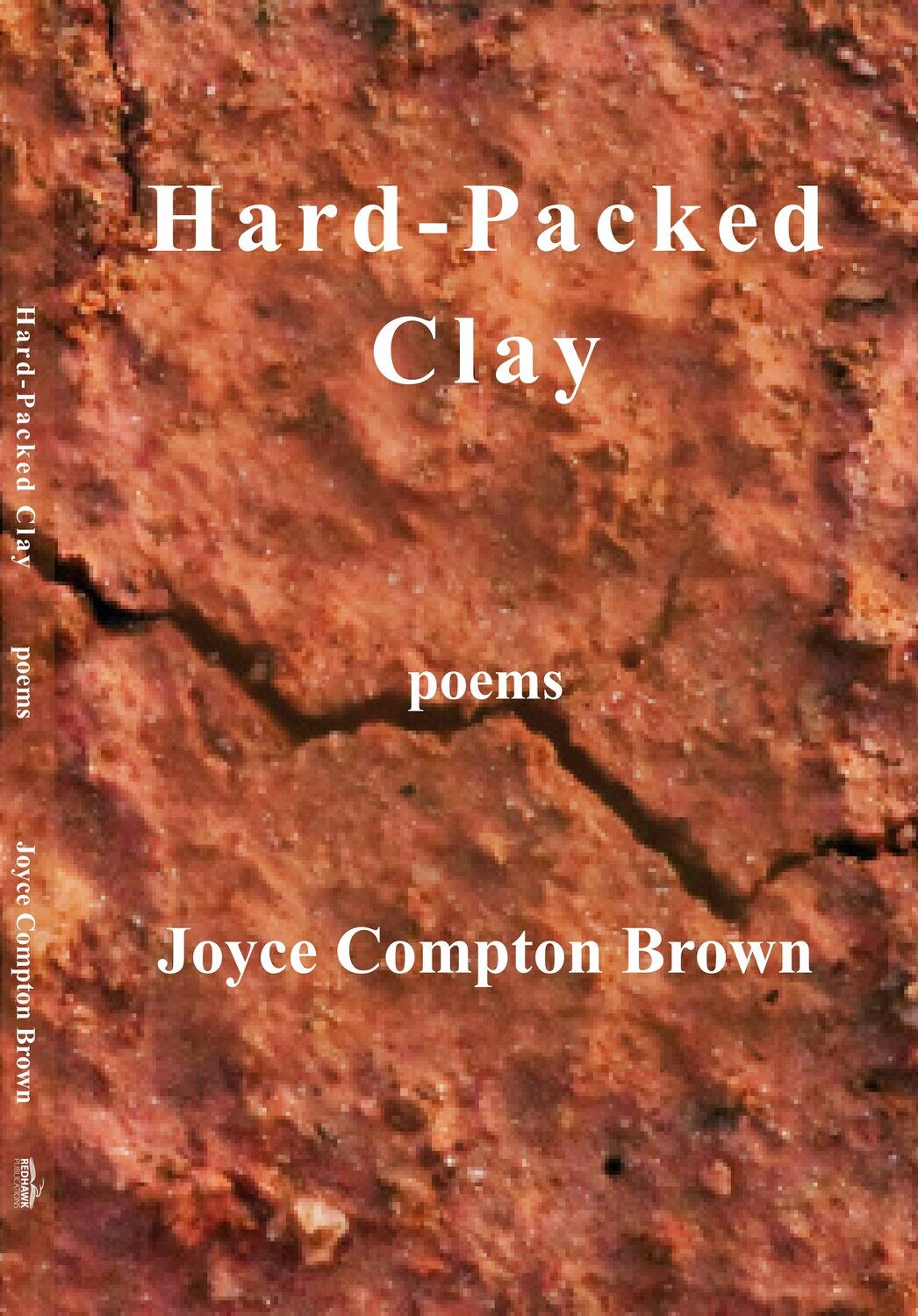 These elegiac poems plumb the depths of loss, but the beauty and craft in their making, the honoring of lived lives, achieves, as the author hopes, “the heart’s resurgent beat of hope.” Like Yeats, Joyce Brown is the rare poet whose work achieves more power after youth and middle-age. Hard-Packed Clay is a marvel.

Joyce Compton Brown’s captivating HardPacked Clay is a kind of family reunion, elucidating as any traditional Southern Decoration where visitation at gravesites is both with the living and the dead—“This graveyard is a storybook.” Meeting there are those of the past belonging to an incorrigible religion/community and those of the present who are more tolerant. Stories told at such gatherings involve the struggles of progenitors, duel edged with hope for a better future. Each poem holds a handful of red dirt from a farm abandoned for industrial jobs and their own brand of hardship. Eventually, sterile dirt, rejuvenated by the souls of so many, springs forth what was once removed from the old home place environment— purple irises, bluebirds, and meadowlarks.

Community?Town?Region?Cosmos?I would suggest that JoyceCompton Brown’s new collection of poems offers us the latter, in the homely guise of the first.This is indeed her scrupulous documentation of her “postage stamp of native soil,” as Faulkner described it, and it is inexhaustible, a life’s work.Male/Female, Old/Young, Quick/Dead, Calvinist/Latitudinarian, North/South, Now/Then – all these polarities, and many more, are explored in language that, while condensed and crafted, leaves plenty of room for rich, evocative description.As the first (or the second, perhaps?) poem in the book concludes, “I’d rather sing of meadowlarks and spring / but heart’s core seeks the sore that will not heal / and strings up stories for the soul to air.”“Air” can mean “to tell,” but it also means “a tune.”These are the ballads of Brown’s people and they are unforgettable.

In Hard-Packed Clay, Joyce Compton Brown delivers a meticulously detailed portrait of the South Iredell farm community where she grew up. There is beauty, heartbreak, and everything in between on these pages. Clay finds Brown at the height of her poetic power, avoiding the temptation of nostalgia, yet crafting her narratives with warmth and candor.

Joyce Compton Brown is the author of two chapbooks, Bequest (Finishing Line) and Singing with Jarred Edges (Main Street Rag) as well as Standing on the Outcrop (Redhawk Publications). She has published poetry, prose, and art. A Pushcart nominee, she wins or places in an occasional contest and has published in numerous journals. After earning degrees from Appalachian State University and the University of Southern Mississippi, she taught at Gardner-Webb University for a number of years, using summer opportunities for further study in Appalachian culture, roots music, and poetry at Berea College, Hindman Institute, and Appalachian State University. She loves the history carried in music of the commonplace and spends time sketching mostly the old and decrepit.A current major focus is the interconnectedness between ancient cultures and our own times. She lives in Troutman, NC with her husband and cat.