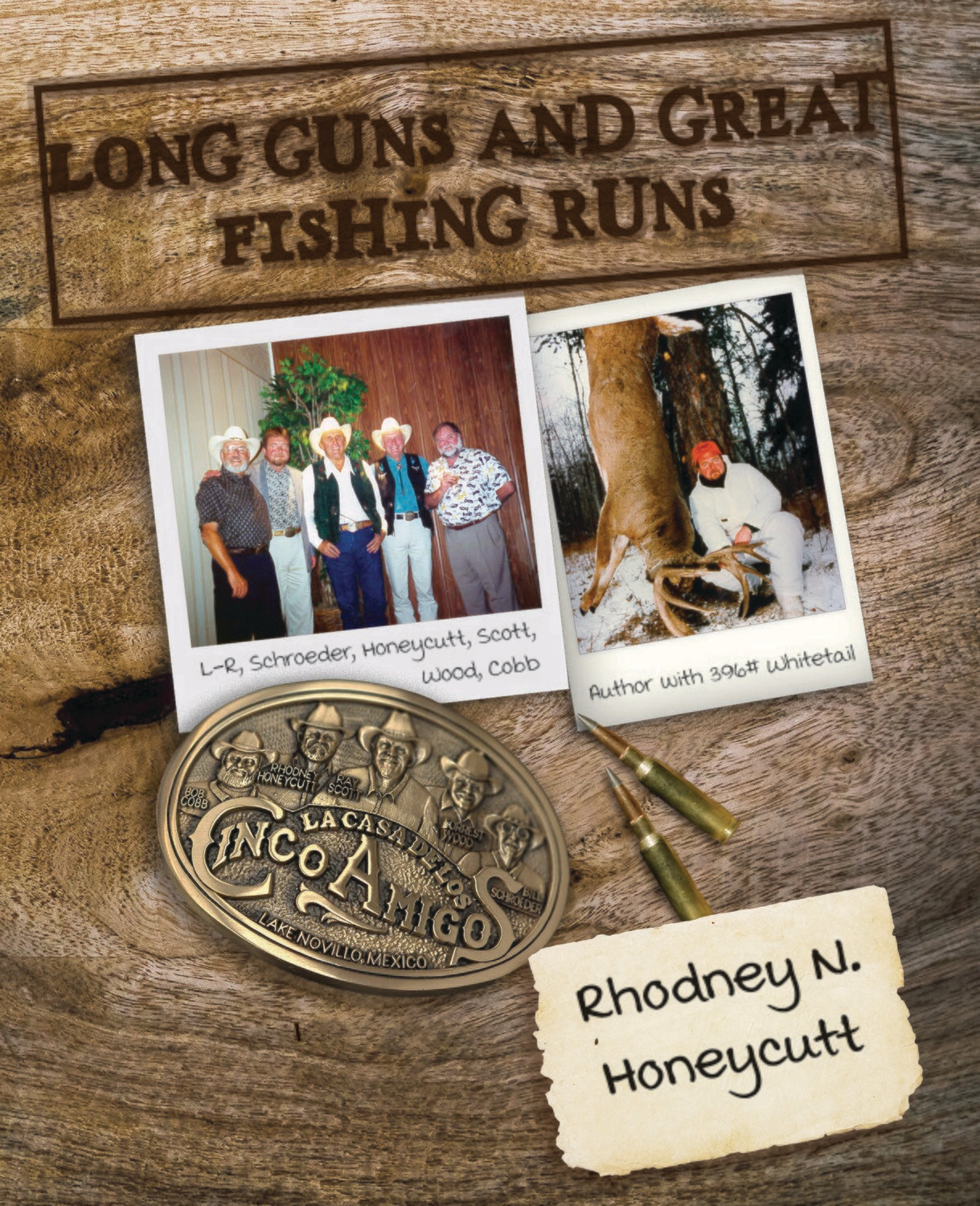 “Rhodney is younger than I, but we have always clicked. Rhodney was one of the youngest competitors in my early BASS tournaments. Together we have hunted whitetail and elk, and fished for largemouth on the lakes of Sonora, Mexico. He is one heck of an outdoorsman… and chef.”

“A toast to one-shot Honeycutt, one of only two clients I’ve guided during my 30 year career as a PH that I would stand with and do a two man elephant cull. 15 shots, 15 clean kills, including a leopard bolting at night…”
—Paul Webb Martin, Legendary African PH and Rhodesian War field commander

“Rhodney Honeycutt, forever a gentleman, was one of the early, successful pioneers of tournament bass fishing at a very young age when BASS fishing tournaments were in their infancy. He has an uncanny ability and passion for sharing his knowledge and experiences with the nest generation of Outdoorsman. A loyal and dedicated friend to many”
—Earl Bentz, Legendary Boat Builder/Outdoorsman

“One of the greatest blessings of my long friendship with Ray Scott was the opportunity to spend time with extraordinary outdoorsmen, people like Rhodney Honeycutt. Rhodney has lived the life most other hunters and anglers can only dream of---or read about. Men and women who truly love the outdoor lifestyle will enjoy reading his memoir, Long Guns & Great Fishing Runs, which tells about the trophy game animals, the giant fish and the larger-than-life individuals he encountered in a lifetime of hunting and fishing.” —Dave Precht, former editor, Bassmaster Magazine

“Rhodney is not only a first-class sportsman and outdoorsman, but a great father and family man. With all the years of fishing with me on the ‘Fight-N-Lady’, his family came first from his first fishing trip with me, letting his wife Sharon (girlfriend then) catch her first white marlin, to later years teaching his children their fishing skills. I saw these skills in their Dad years earlier, when he spent 14 plus hours in the fighting chair enduring all kinds of severe weather squalls to land his 780# blue marlin. Rhodney is one special type of person, and I am proud to know him and to have fished with him and his family.”
—Capt. Sam Stokes, Fight-N-Lady

“It was such a privilege to have Rhodney in our Elk Camp. The Wilderness was enhanced by the quality person and sportsman he is. Not many could have “Braved the Storm” with an adult Grizzly challenging his ground. A multitude of hunters came and went in 30 plus years in our Wilderness Elk Camp, but only a few stand out to go into my lifetime of memories”
—Nate Vance, Cody Wyoming (legendary Wyoming Outfitter)

“Thank you so much for the book (manuscript). Our Grandsons are sure enjoying looking at it. Thank you for being such a dear friend to Forrest.” —Nina Wood, Cofounder Ranger Boats

“I may have filmed the largest elk never shot…”
—Mike Morgan, TV Host and Producer “Hunting Across America”

“Over nearly half a century, I have been lucky enough to blaze several paths with you. We hunted the hills of Burke County, chased bass across several states, in the old days closed down a few Honky Tonks, and visited beside campfires in Mexico. To quote the great philosopher Lewis Grizzard, ‘Unless you’ve been to a country juke joint on a Saturday Night, or bass-fished with somebody who knows where the glory holes are, your life is miserably incomplete.’ We’ve checked this one off our bucket list. Of your many accomplishments, the most prized one in my opinion was your choice of great friends to associate with and I’m thankful you introduced me to two of them, as on trips with you to Mexico I got to know Ray Scott and Bill Schroeder.” — Lenny Smathers, IRS Agent Retired, VP NC B.A.S.S. Federation

“As a historian of bass fishing, I’ve always been interested in Rhodney’s early career with B.A.S.S. as a teenager. When I got the opportunity to read the draft of “Long Guns & Great Fishing Runs” I jumped at it for the fishing history. I received a copy on a Friday evening and by Sunday afternoon had read the entire 311-page draft. Although I was interested in reading about Rhodney’s fishing adventures, the hunting stories proved just as amazing, and I could not put the book down! This is a must-read for anyone with a passion for the outdoors and how mentors such as Rhodney’s family and close friends, can make a huge impact on a person’s life”
—Terry Battista, Bass Fishing Archives

“Whether it was bass fishing in Mexico, or pheasant hunting in South Dakota, or Elk hunting in Wyoming, the trips with Rhodney have all been memorable. I think my two Elk hunts in Wyoming are remembered the most. The first hunt was exciting as it was my first experience on such a hunt. Rode 34 miles on horseback day 1 just to access camp. Got my first shot at an Elk, hit and killed the animal on the first shot. The second hunt from a hunting perspective was uneventful, having fired my rifle only to verify the sights. However, the excitement of the hunt was to follow during the night, as we were asleep in our tent, we were visited by a bear, bigger than all three of us combined. The bear stuck his massive head and shoulders through the wall tent flap, looked around and let us know he was there. Here we are with three 44 caliber magnums aimed at the bear, and the three of us yelling/screaming at the bear with all our might. Luckily the bear retreated, and all was well. Not sure the bear or the pistols were the most dangerous part of that experience. Rhodney’s trips are always making interesting stories! Best of all is the camaraderie.” —Eddie Edwards, President Comm/Scope

“Rhodney is the consummate outdoorsman — so when you prepare their simple recipes on the following page, on the shore of your pond, raise a toast to Rhodney, yourself, and to all the great fathers who keep themselves rooted deeply in family.” —BOB LUSK, Editor Pond Boss Magazine

“Of the many hundreds of sportsmen who have passed through the villages that I have lived in, you are the first to consider our students. I was impressed by your thoughtfulness.”
—Donna Eldridge, K-3 Teacher Port Heiden, Alaska