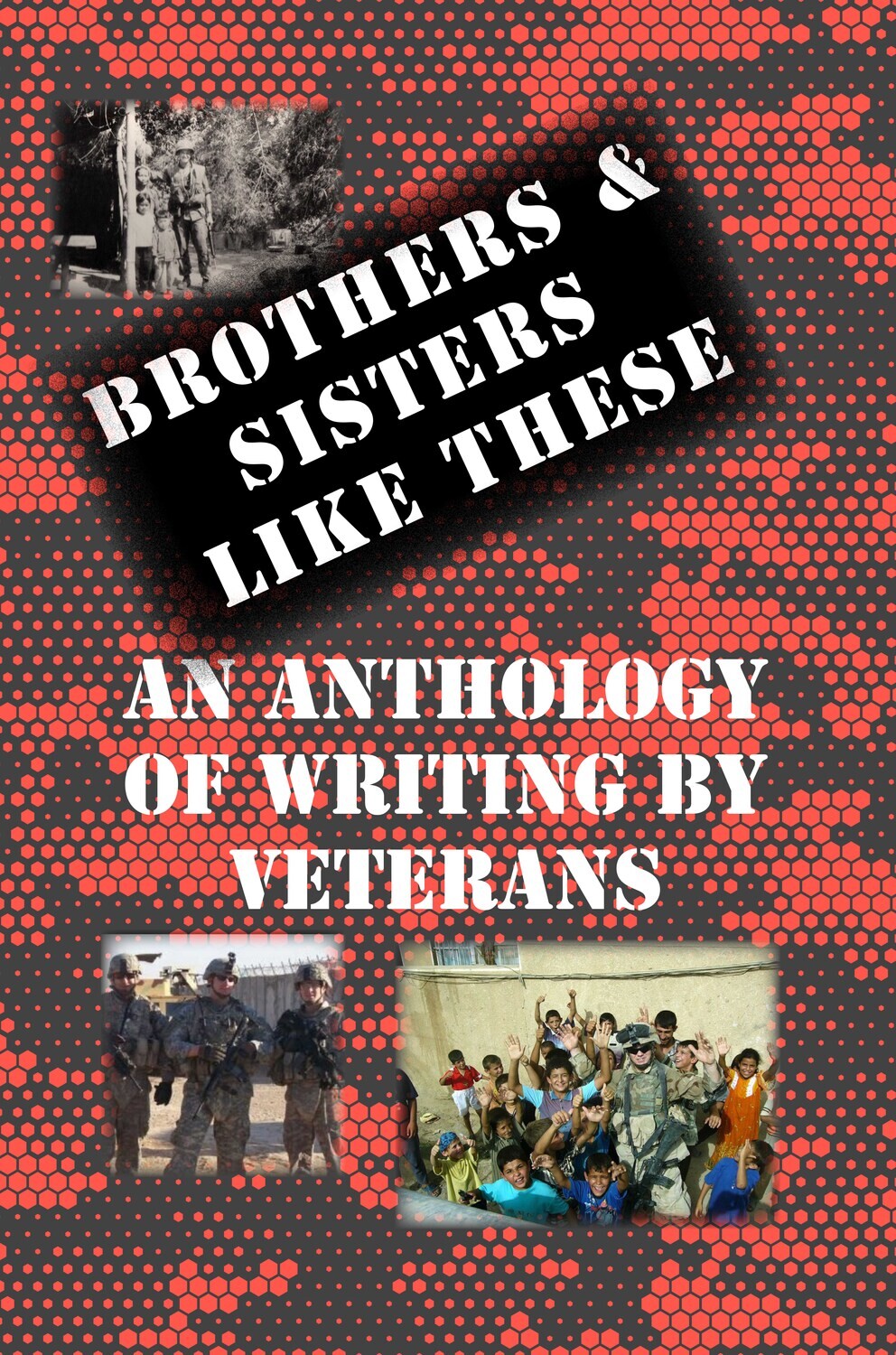 Brothers & Sisters Like These: An Anthology of Writing by Veterans

This is a story about stories … a prelude to the deeply felt expressions in the pages that follow.

Writing programs for veterans have existed since the Second World War to help veterans make sense of their military experience and honor the voices inside needing to be heard.

Quoting Ron Capps of the Veterans Writing Project, “Not everyone is a story teller, but everyone has a story to tell.” He reminds us that for veterans with PTSD,“either you control the memory or the memory controls you.”

I came to the VA as a Primary Care physician in 2011 knowing little about military culture, and nothing of the experience of combat. It didn’t take long to realize how many of the Vietnam veterans in my care were still carrying wounds from their time in country. It was hard to accept they were but a fraction of the estimated 250,000 Vietnam veterans living with PTSD five decades later.

They told me what war had done to their emotions, behaviors, sleep, dreams, and moods … torelationships with family, friends, careers … about avoidance and addictions … how it was still hard to go out in public, to have normal conversations … to trust that this was a world where they could feel safe, could love, and be loved.

They told me about battles fought, comrades lost, regrets they couldn’t shake … about anger at being on the losing end of a war despite winning all the battles. They spoke to their treatment on returning home, and the shame and rage triggered by an ungrateful nation that sent them to serve on its behalf.

I came to learn about moral injury, defined as “extreme guilt and shame from something done or witnessed that goes against one’s values”.

I wondered why it would ever surprise us that sending moral individuals to a world defined by death and destruction would lead to emotions coming unglued, to neurons going awry. I wondered how anyone could come through unscathed, and came to understand that few really did.

As I listened to these veterans the unseen wounds were up close and personal, sitting next to me … the men often avoiding eye contact, their voices cracking, often holding back tears. They seemed afraid to speak what was on their minds, rightfully feeling they’d been abandoned to carry their wounds alone, with little hope for anything beyond the reality they’d been forced to live.

I came to better understand the weight of burdens carried, each in their own way but with so many common threads. Most out of some necessity had buried what they carried, having no way to reconcile or leave the war behind.

Gratefully I came to know of former North Carolina Poet Laureate Joseph Bathanti, a Professor at Appalachian State University. Joseph as his signature project spent two years leading writing workshops for veterans across the state. He understood as I the importance of veterans being able to tell their stories in a safe, non-judgmental setting. We both believed the work had the potential to help heal what remained wounded.

In 2014, with the blessing of our medical center’s leadership, grants from the North Carolina Arts and North Carolina Humanities Councils, and support from the community, Professor Bathanti was named Writer-in-Residence at Charles George. We eagerly began planning a creative writing program that we hoped would restore a sense of these veterans’ humanity, and in so doing, foster a degree of recovery.

As I recruited men during routine medical visits, I began to see more deeply how remarkable each of them were, all heroes in their own right who needed to unburden themselves in ways they may or may not had yet recognized.

They told me they were reluctant to bring the war back up, that creative writing or poetry seemed like a “cockamamie idea.” that they couldn’t write, had trouble with spelling, bad experiences with groups, and more. But they too gradually spoke more about the wounds that haunted them and were often ready to try anything that might help.

Thanks to the ongoing Charles George grant and community support, we held four eight-week sessions over the next few years involving 38 veterans. We continued to meet monthly with 25 of them. These burgeoning writers served as the catalysts and mentors for the remarkable work yet to come. The pages to follow are but a fraction of the stories now told over the past eight years.

Our time together wasn’t always easy. There were difficult sessions. Not all the men chose to continue. There were often tears of some kind for all of us. Mine came often hearing the pain they felt, from the deep respect I held for their stories, and from overwhelming gratitude watching their healing unfold. For many of the men it was transformative in ways we never could have imagined.

Though we didn’t see their courage in country, we saw it over and over in Classroom B. Their commitment, honesty, and writing took our breath away again and again. It often felt like church from the work of the soul they engaged in, and the deep reverence we communally felt for their service, sacrifice, and for one another.

The men found an ability to articulate memories, losses, and triumphs in their own unique voices. We watched a sense of brotherhood evolve, and witnessed the men begin to reclaim the humanity taken from them in an increasingly forgotten war.

In August 2016, 18 of the veterans agreed to participate in a staged reading at Asheville Community Theater titled Brothers Like These. We shortly thereafter did a second at Appalachian State to a standing room only crowd of students and teachers, and the following year a third, again at the community theatre. These launched another 10 readings across North Carolina over the next few years.

On each occasion the audience was deeply touched, frequently in tears but always leaving with a new understanding and respect for all who served in Vietnam, and by proxy in combat zones wherever they may be. The men felt honored, empowered, and a long overdue sense they were indeed heroes of their own stories. The readings provided a platform for the welcome home they never received.

A chapbook of the same name provided a visible reminder of their commitment, and the stories they had to tell. It remains St. Andrews Press’ all-time best seller.

Two additional groups, VA Innovation Network funding, and a Mini-documentary sponsored by the Healthy US Collaborative allowed us to spread the work and advocacy even further.

And now to these 77 remarkable stories you hold in your hands.

Core members of the group, transformed by their healing experience, formed a non-profit to continue the work outside the VA, The North Carolina Veterans Writing Alliance. They from the start made it a priority to expand the work to post-911 and women veterans, evolving into Brothers and Sisters Like These.

Our veterans from the post-911 wars know their own horrors and losses. Their sacrifices and struggles are no less daunting, their need to be heard no less critical. The Writing Alliance’s commitment to recognize and honor their younger brethren holds equal moral imperative. These stories too need to be told, and heard.

The accomplishments of this band of brothers and sisters are astonishing. Each gathering, each conversation, each story told over the past several years have led to this additional volume of stories.

The Alliance has continued to hold writing groups under the direction of award-winning writer Elizabeth Heaney, with veteran writers themselves helping lead the groups. They’ve continued to do public readings at libraries, schools, Memorial and Veteran’s Days, Honor Flights, and the Flat Rock Playhouse among others. They’ve brought song writers from Nashville to create music based on their stories. They’ve held multiple performances with the Black Box Dance Theater.

Maybe most importantly they’ve continued to give voice to the next generation of men and women who’ve experienced the traumas of combat in service to our nation. They’ve brought together veterans from different eras to share and heal together.

They’ve brought together family members to join them as their voices too hold deep meaning. Quoting Ron Capps again, “No one goes to war alone.” Those left behind pay a deep price, often for decades to come. They much too often share in the burdens of war, including the ultimate sacrifice.

They bring you here a collection of stories that will inform and bring you to a deeper understanding and appreciation for the service and sacrifice of not only these veterans and family members, but by proxy all who have known war. You’ll see up close and personal the depth of feeling and creativity that resides in the human spirit despite what traumas it’s experienced.

Words and relationships have the ability to build shared community, and through those, to help heal. We welcome you to this vibrant, growing community of the ties that bind.

To quote the poet Muriel Rukeyser, ‘The universe is not made up of atoms, it’s made up of stories.”

I hope you’re as moved and inspired as I in the reading. Open your hearts, feel deeply, and join us in welcoming home the next and every veteran you meet, now and forever.